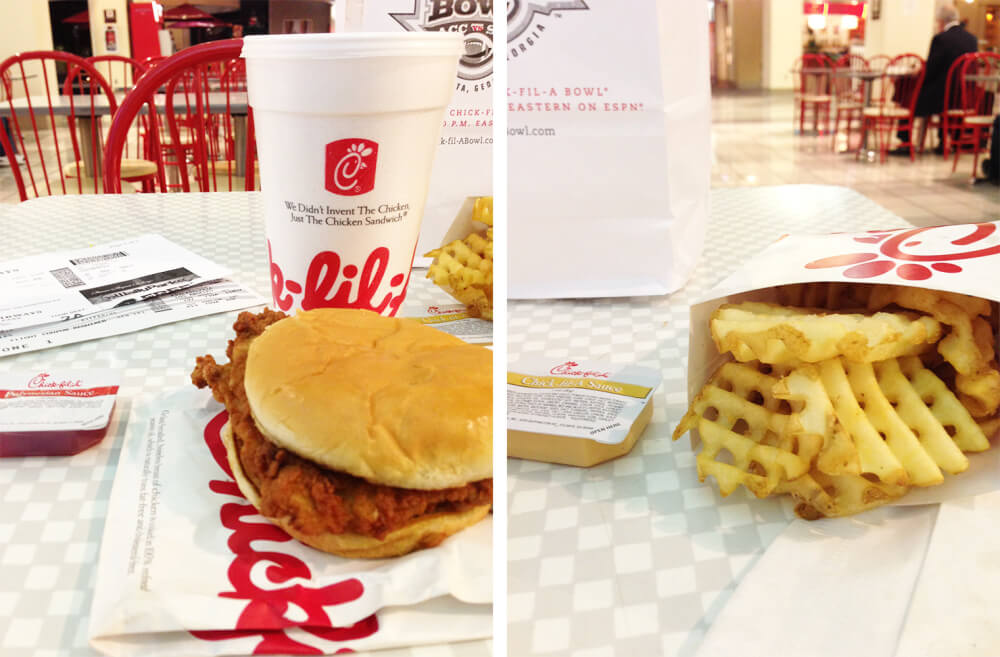 the situation: i’ve been dying to see what the craze is all about with chick-fil-a. everyone and their mothers was so excited that one opened up in hollywood (relatively close to me). however, it seems as though every time i want to try it, it’s been a sunday…they are closed on sundays. darn.

i never thought that my first time would end up being at the philadelphia airport after missing a connection by 5 minutes…ahem…after arriving 30 minutes before my flight left (i thought this was enough time. foolish me.) and running through the airport with all my luggage (note to self, go to the gym more often…for situations like this). oh, and did I mention that it was the last flight out of phili to los angeles that night? thank you, corporate travel.

good thing every story has a silver lining. my silver lining was chick-fil-a for dinner! don’t judge, I have been wanting to eat here for a year now. i normally would not review a fast food chain but given the cult following to this franchise, how could i not?

as a side, personal note, i am a huge fan of fast food. my favorite is the big mac. yep, i said it.

i ordered a chicken sandwich meal (look at me, what a baller) which included fried chicken sandwich (apparently has pickles), crisscut fries, and a medium dr. pepper. sauces chosen: chick-fil-a sauce and polynesian sauce.

thoughts: when ordering, the cashier was nice enough to sympathize with my situation (we bonded) and she suggested chick-fil-a sauce, which in her opinion was “like honey mustard, but better.” exact words. i also opted for the polynesian sauce due to recommendations from friends and because i thought it was like a sweet chili sauce. to my surprise, i loved the chick-fil-a sauce! i’m not really qualified in any way to tell you what is in it so i will just tell you to go try it. the polynesian sauce (you will laugh) tastes to me like honey mustard.

my sandwich came out piping hot, which to someone traveling alone, eating at an airport alone and just missed the last flight out home was the greatest thing in the world. it could be because i was exhausted from traveling but the sandwich…ehhh…was just a chicken sandwich? nothing too mind blowing. i would come back to eat the sauces, but then again i’m a sauce lover.

well there you have it. my long-awaited adventure to chick-fil-a.

have a good weekend!